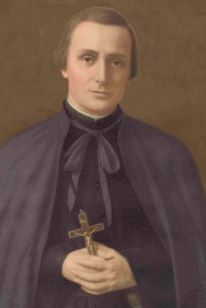 Peter Chanel was born in a small village near Lyons, France in 1803. Observing his simple piety and in­telligence, his parish priest had him admitted to a church ­sponsored school. Chanel eventually studied for the priesthood and was ordained a priest for the Diocese of Belley in 1827. His mind was set on missionary work and after four years of parish ministry, he joined a recently formed religious community of missionary priests called the Society of Mary, the Marists. Father Chanel sought an assignment to a foreign mission, but instead was sent to teach in the local seminary where he soon became a spiritual director and the vice rector.

In 1836, the Marist congregation was assigned a vast area in the South Pacific for its mission work. Very little was known of the New Hebrides, the colonial name for the island group that now forms the nation of Vanuatu. But a delighted Father Chanel was appointed superior of a small group of missionaries that traveled to the area. They split up and Father Chanel went to the Island of Futuna, between Fiji and French Samoa, accompanied by a lay brother and an English layman. They were received by the island inhabitants with much hospitality and soon earned a great deal of respect for their care of the sick.

Once the missionaries learned the local language and began preaching directly to the people, the king of the islanders became disturbed that Christianity would pose a threat to his sovereignty. When his son asked to be baptized, the angered king sent warriors to assassinate Father Chanel. On April 28, 1841, Father Chanel was killed with an ax and his body cut up with knives.

Two weeks after the killing, a passing American trading ship took Father Chanel’s companions and others to New Zealand and safety. The French landed the following year to make official inquiries and to take Fa­ther Chanel’s remains with them. By the time of their arrival, however, the entire island nation had converted to Christianity.

Father Chanel was declared a martyr and was canonized in 1954. His relics were returned to Futuna in 1977.

St. Anthony of Padua is one of the most beloved and admired saints in the church. Because he was a prolific preacher and witness to the Gospel in his personal life, he is known as a great stewardship saint.

St. Anthony was born on the Feast of the Assumption in Lisbon, Portugal, in 1195 to a wealthy and educated family of the Portuguese nobility. He entered the Augustinian religious community at an early age where he devoted himself to the study of sacred scripture and Latin classics.

He joined the Franciscan Order when he was 26 years old and traveled tirelessly to preach what it meant to live according to the Gospel. He is be-lieved to have made as many as 400 trips to towns in both northern Italy and southern France.

St. Anthony knew that preaching was not enough to help people understand how to live according to the Gospel. He believed he had to give witness to the Gospel by the way he lived his personal life. He adopted and maintained a simple lifestyle consistent with what he believed the Gospel was calling him to.

St. Anthony died in Padua, Italy, on June 13, 1231 at the age of 36. He was proclaimed a saint less than one year after his death. So simple, yet compelling and inspiring was St. Anthony’s teaching of the Catholic faith that he was de-clared a Doctor of the Church by Pope Pius XII in 1946.

Best known for his patronage of seekers of lost items, St. Anthony is com-monly referred to today as the “finder of lost articles.” Few people know that he is the patron of many other causes including the poor and those who travel. His feast day is June 13.